EIS designers and control system engineers started researching and developing the system in July last year, when Skyline Director Bill Walker came to us looking for a solution to make this latest luging operation more efficient and safer for their staff to operate.

The system that employs two unique robots specifically designed for the Calgary luge. One robot loads the luge carts onto the chairlift from the bottom of the run, while the other unloads them 100 metres up, at the top of the 1.6km track.

Having the robots in place means there is no need for Skyline employees to lift the 30kg carts by hand, thus avoiding the injury risk associated with such heavy lifting.

As part of the design process, EIS collaborated with local mechanical engineers JK’s & WBE to manufacture a prototype which they used to perform robotic testing in Invercargill, before the design headed offshore to be manufactured and commissioned in Calgary.

The most important consideration for this project was health and safety.

Most robotic automation systems are used in confined spaces with trained staff. With this though, we had to remember that the system would be outside, in a public domain with hundreds of people coming and going nearby.

As well as providing the system design and automation software, EIS facilitated and liaised with subcontractors in Calgary to construct and install the robots. Once installation was complete, Brent travelled to Calgary to perform on-site safety verification testing, before the attraction opened to the public for the 2013 summer season. 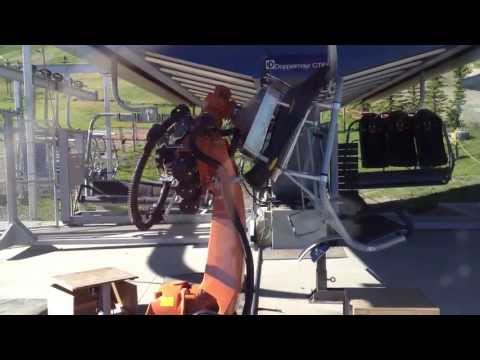 A modern and solution to a significant workplace safety risk has seen a Southland business take home a national award.

​Giving back to our community

It’s been a busy few months for us at EIS, but not just with our own work.

​EIS Senior Electrical Engineer, Charlie Turner, is in Shanghai this week to oversee the fabrication of the first Allen Bradley Centerline 2500 MCC with IntelliCENTER for the NZ market.

​Local company, EIS Automation and Electrical, took out the top spot at the 2017 Master Electricians Excellence Awards, which were held in Auckland on Friday August 25.

​EIS will be at the forefront of the digital industrial transformation thanks to a new relationship with GE Digital.

Looking for a change in 2017? We’re recruiting!

We're on the hunt for a Senior TUV Engineer in Canterbury.

Check out our new short video to find out who we are and what we do!

Sensor can detect E. coli and other bacteria in 15 to 20 minutes

The speedy and cost-effective detection of E. coli would be a boon to food and beverage processors everywhere.

We were thrilled to have a near full turnout with 65 staff gathering this morning at our Invercargill office for our quarterly Health & Safety breakfast.

We are currently seeking an Independent Chairperson to perform an important governance role in our award-winning engineering, automation and electrical company as we move into a global market.

EIS is excited to move into their new premises at 24 Onlsow Street on June 23.

EIS on the Move

We are very excited to be moving to a new building on Onslow street in Invercargill.

​EIS CEO is the Chair of the Dog Island Motu Piu Charitable Trust who have recently been granted a licence by Maritime NZ to carry out restoration work on the island.

EIS is excited to be attending the Working International Expo in London on 12 and 13 March and in Manchester on 19 and 20 March.

EIS’s engineering department has more than tripled in size in just 12 months. The growth has seen the company’s engineer numbers soar from five to 16, and has attracted nine new highly skilled workers to the city from all corners of the globe.

​Thank you for all your support during 2015 and we wish you all a very Merry Christmas.

​EIS launched its 2020 vision and revised core values to a full house of team members at the annual Top Team event on Tuesday 20th October.

​EIS’s engineering department has more than tripled in size in just 12 months with the company’s engineer numbers soar from five to 16.

See how a robot separates wood, metal and stone from construction and demolition waste

Dean Addie offers NZ Manufacturer an insight into the current and future success of EIS.

Last week we hosted a mihi at EIS to welcome the new Chinese owners and investors of Blue River Dairy.

We are delighted to help more people than ever before by providing continued support to many of our longstanding causes while aligning ourselves with a number of new ones too!

Dunedin-based Paul Moodie has been appointed as our new Independent Director.

Our office will be closed for a few days for Easter and Southland Anniversary Day - we'll be back on Wednesday 8 April.

Are you our next Electrical Estimator? Full details here.

Thanks for all your support during 2014 and we look forward to working with you in 2015.

We are currently seeking an Independent Director to perform an important governance role in our company.

​EIS CEO Dean Addie is Chair of the Dog Island Motu Piu Charitable Trust. View this article from The Life magazine to learn more about the Trust.

​A huge congratulations to all the team at EIS on reaching 13 years without any lost time incidents (LTI).

EIS coming to Perth for the Working in New Zealand Expo!

Looking for a new challenge? We are now seeking a HSEQ/HR Co-Ordinator to help maintain our industry-leading safety record.

When given the opportunity to support electrical inspector Brett Pearce's grandson Justin to go on the Spirit of Adventure, we were more than happy to assist.

EIS has taken on a graduate Control Systems Engineer under the EU Global Placement Scholarship.

Leading the way in safety culture

A “collaborative and development focused team environment, demonstration of continuous improvement and a solution based approach” were all leading factors in EIS’ win at the inaugural 2013 Westpac Southland Business Excellence Awards.

With a well-trained eye for health and safety, EIS CEO Dean Addie spotted a potential ‘workplace’ hazard during his routine school drop off recently.

A great effort by the EIS Team to attain a Zero Harm - Home Safe working environment.

"Lighting was one of the top ways we found to save energy, with easily achieved savings of about $1000 a month"